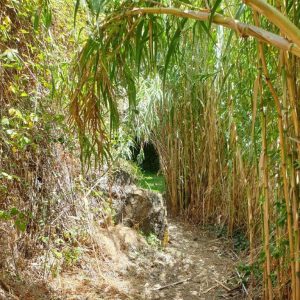 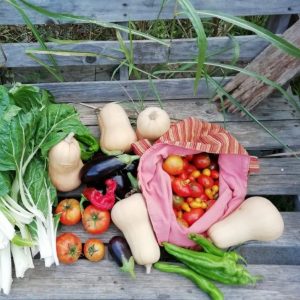 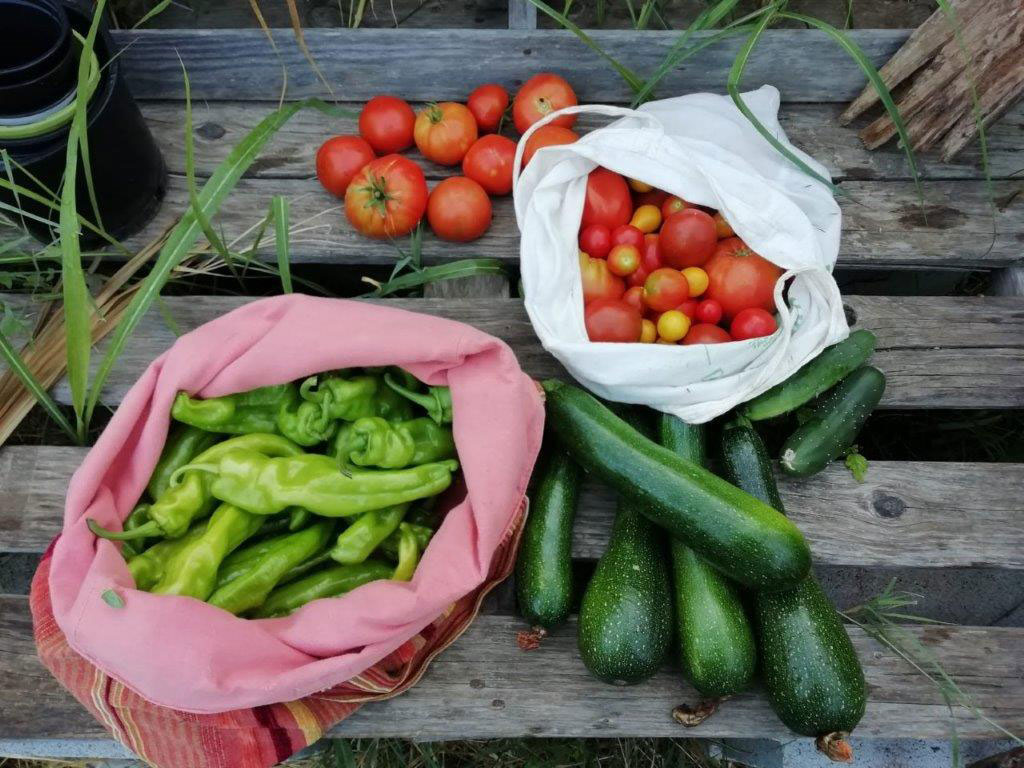 In the summer months we have a rich harvest, zucchini, peppers, cucumbers, aubergines, pumpkin and above all tomatoes. In many variations we bring the harvest to the table and enjoy the wonderful taste and colours. Some of them are also processed and preserved for the winter.

Although we are still in the middle of the dry season, we are already preparing the finca for the autumn rains. Our finca is terraced and in case of rainfall, which can sometimes be very heavy here, the rainwater has to be drained in canals. In late summer we clear these canals of creepers and blackberries so that the rainwater can flow freely. Again and again, such drains have to be repaired or even completely restored. For example, we have now renewed a section of a canal that runs next to the access road,which the rainwater had already washed away partly.

Drinking water from the spring

We get our drinking water from the village well in nearby Ojén. Or we go to the spring near the finca and get the water directly from the mountain. This is more laborious as the access is a bit impassable, but the water tastes even more delicious. This is really something special: water, a gift of nature – here it can be experienced directly.
Next to the spring runs the stream that also feeds our finca. From here we take the water for the irrigation of the finca with hoses. After fetching the water we checked the filters at the tapping point. Leaves and everything that is sucked in is removed so that the irrigation can flow unhindered.

Here in Andalusia we live in a centuries-old olive culture. Nowadays, research is being carried out about the many possibilities of the pomace that is produced during the olive oil production, especially for organic farming. For example, we have been fertilising our organically farmed finca with an extract of olive pomace for several years. We add this liquid olive extract to the irrigation system in a three-week rhythm and thus supply our plants.
From mid-August onwards, the gradual change towards autumnal weather became apparent this year, and towards the end of the month the daily maximum temperatures fell below 30° C. By continuously shortening the time of day at the same time, we were able to shorten the length of the irrigation programmes towards the end of the month.

Ten female and ten male chicks of the ‚Barred Rock‘ breed came to us at the age of two weeks and now complete our chicken enclosure. This breed is very robust and we will try to adapt them slowly but surely to soya-free feed. We eagerly await their laying performance next year. We will then keep the strongest of the cocks and see if the hens want to breed.

The shredder work was resumed and a large part of the cuttings produced in spring and summer was shredded (approx. 2 m3). The collecting point for the cuttings of the last few years was cleared away and the remainder was sieved and shredded. The sifted material was already in a raw humus condition and was distributed directly on the vegetable beds (approx. 2 cm) and covered with pre-dried grass cuttings.

The summer is coming to an end. The right time to turn your attention to planting winter vegetables. We have planted the vegetable beds with leek, beetroot, white cabbage, red cabbage, cauliflower, Chinese cabbage, savoy cabbage, Brussels sprouts, broccoli, kale and romanesco, as well as various salads. The birds like the ground cover of the beds very much, as they find plenty of food underneath. Thus, the young plants had to be uncovered regularly, as they were partially covered by the birds‘ scratching.

We have redesigned the entire metal structureor of firewood shed behind our house, which in 2018 had to give part of its floor space for the now required power transformation unit, due to the construction of the solar system, and adapted it to the conditions, so that now the same amount of firewood can be stored as before.

Our little dog Lotta unfolds pure joy of life when she jumps and romps in the stream. Especially in the hot season she likes to take the opportunity to refresh herself in the cool water of the stream. She also likes to ‚control‘ the sprinklers of the irrigation system by trying to catch the water.