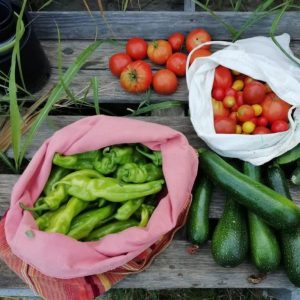 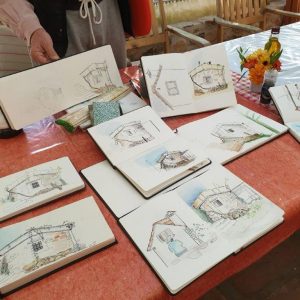 This month we were able to harvest cucumbers, aubergines, peppers, courgette, pumpkin and tomatoes. The harvest of summer vegetables is now slowly coming to an end.

In various places yuccas that have become too high and too long over the years had to be cut back. In the course of the last few weeks many of them have already broken off, due to their own weight. These cut yuccas were collected on one terrace to be burned in winter.

How are the chicks doing?

The twenty chicks that came to us last month at the age of two weeks are developing well. According to their upgrowth, we have already extended their ‚home‘ several times. The first time they spent in the cosy nursery. In the meantime they have access to the enclosure.
One of the chickens is being bullied by its ‚roommates‘. They push it away from the feeding place. Due to their attacks, it no longer has feathers on its head and is therefore affectionately called ‚Kojak‘ by us. In order that it still gets enough food, it is now fed by hand. It seems to like this special treatment very much.

Now in September we have resumed the chipping work. We received 1m³ of the cuttings that had been accumulated up to then.